May 16, 2020
As I sit in front of the fan trying in vain to dry the beads of humidity pooling in my pores, let me recount the events of the past week. Some are most pleasant, others, excruciating, and all kept me from the daily log.

Let us begin with the Mother's Day that was, but then wasn't as it was supposed to be. The plan was to have breakfast twice.
Round One: eggs, made by Co-Captain Dad because I would inevitably sleep in and starve the crew if they were forced to wait.
I knew there was a good chance that I would miss first breakfast all together, but it was a risk I was willing to take. Sleeping in is divine.
Round Two: buttermilk pancakes from scratch with maple sausage, made by Me after I stirred from my slumber.
But this round would not come to pass on Mother's Day...

I yawned and stretched and a cute little bouncing face appeared in my periphery.
"Mom, Mom, Mom, Mom, Mom, Mom,"
Everything was still fuzzy as I drifted from dreamland to reality. It's hard entering reality these days. Dreamland is filled with rich scenery and adventure and people. Wonderful people. Even when dreams features horrific zombies, I can always wake up and know it's not real. We can't wake up from the reality of new world. At least not yet.
"I made you this!"
A red card was dancing through the air waiting for me to be awake enough to have full control of my arms. I opened the card and it was the best one yet. Co-Captain Dad had helped Chief Mate use Photoshop. Music notes and hearts decorated the page. On the right hand side floated a Chief Mate head attached to some blue wavy lines.
"I'm a wacky-waving-inflatable-flailing-arm-tube-man!!!"
Sure enough, I could envision his head sproinging about on the page. It was terrifying and delightful and it was my most favorite card ever.
Breakfast Round One was also delightful. It was post-breakfast that changed the shape of things for the rest of the week.

I had felt the pull for days leading up, but hadn't the foresight to realize the gravity of the situation. After eggs and coffee I started getting the notifications. At first it was a slow trickle.
"Where do we find the readings for the assignment due tonight?"
"Did you guys finish the reflection?"
But as the hour progressed, the walls began to groan from the stress on the ship. Rattling could be heard deep in the engine. Five more notifications pinged on my transmission device. The ship was headed straight for the Gradschool Black Hole. The notifications pinged, buzzed and pulsed. Ten turned to 20, 30, upwards of 40 messages.
"Can someone email the teacher and ask why we all have zeros for the assignment?"
"My grade dropped from an A to an A- AN A MINUS!!!!!"
"It's hardly an optional assignment if we are getting points docked."
"Did you guys see the new assignment, due Wednesday?"
"When do we have to declare pass/fail or letter grade?"
I tried to reverse, but the only way out was through.

I had hardly slept through the night. The ship was now carrying an enormous amount of stress. Assignments seemed to be multiplying. Apparently one cannot pass through Gradschool Black Hole without the proper paperwork. The proper paperwork consisted of assignments that required duplicate and triplicate parts that appeared out of nowhere. My body was stiff. I ought to have stretched before bed. Hours spent working on the computer on Mother's Day without brunch is not good for muscles. Neither is it good for the soul.
I ignored the 36 messages on the transmitter. The ship groaned. I feared it might buckle. It was not built for these conditions. No one could have built a ship to withstand the new world pandemic knowingly.
I took the steamiest shower I could stand. My skin was red when I turned off the water. I bent down to get my clothes and my thousands of strands of spindly back muscles screamed and tore.
"Yeeeauuugh!" I groaned.
This was not good. I hobbled to the bedroom in my towel. Threw my clothes in the hamper and collapsed to the floor.

The ship was stuck. A pile of blankets on the floor and pain meds in various shades of orange, blue and red decorated my nightstand. I heard a faint "tink" from somewhere. The ships's metal was adjusting to the new atmospheric pressure. I couldn't move. I could just hold my transmitter long enough to notify my superiors that I would have to cancel my meetings. Then I had to let my arms go limp to subdue the excruciating pain that pulsed through my lower back. It only helped a little. My crew was taking care of everything. Chief Mate had had to make his own sandwich. We studied the old tapes to keep our brains sharp. I drifted in and out of consciousness while Chief Mate took notes on "Clue." Tim Curry's voice woke me a number of times. I half expected him to suddenly burst into song, but that was from a different tape. Is that really Christopher Lloyd? His character is so mild in this one.
"Why are there three different endings?" Chief Mate asked.
"What? Is it over already?" I woke up finally. "Who did it?"
"Everyone!!!" Chief Mate runs around in circles and ninja chops the air, his daily exercise.
Day 59

"Slow" is the word of the day. I did anything and everything to avoid the searing pain of the day before. At one point yesterday I had actually gotten up and thought I could make it through the day on conference calls. No way could I make it in to an office, but surely I could sit up and join the world on a flatscreen. Then I sneezed and almost blacked out from the pain. My breath seized for 5 seconds. I counted. I saw splotches of black and white. Pulsing spirals like the stars swirling around Gradschool Black Hole danced through my head. I knew we were being sucked closer every minute. But that was yesterday.
Today was a day for slow.
The walls of the ship were pressing in. Gradschool Black Hole demanded 7 projects within the next 37 hours. I had completed four. The ship creaked and groaned. Slow, slow, slow. One foot in front of the other. My back didn't feel stripped anymore, but I didn't trust it. My left hip jutted out and I couldn't put as much weight on that side. Three projects were completed and fed to the machine. Yet Gradschool Black Hole was not appeased. The only way out is through.

I was finally able to hobble down the stairs. The ship was stable. I flipped through the crew record, we were almost through the Gradschool Black Hole. Only a few assignments to go. Co-Captain Dad and Chief Mate were stellar crew mates. Oliver, however looked worse for wear. His head was lopsided when he walked and his ear was down.
"What happened to Oliver? Did anyone feed him while I was incapacitated upstairs??"
No one answered. I have to believe they did. Old Man Cat. Maybe he has vertigo. Can cat's get vertigo?

The ship is just about back up to full speed. The atmospheric pressure is relatively normal. Seven assignments completed. Classes are over. About to celebrate when we hit a meteor shower on the other end. Three more assignments get tagged on and one more class meeting added to the calendar. Slow, slow, slow. Keep my back straight. Stretch. Don't forget to breath. Keep the ship fueled and oiled. The only way out is through.

I am still sitting in front of the fan trying to will away the humidity. It is cooler outside than in. I can't convince anyone to sleep outside with me, but at least the windows are open. My assignments are completed. One more meeting on Monday with the Ambassador of Gradschool Black Hole and my first semester will be behind me. I can see the light on the other side of the hole. We are almost through. I can hear the animals outside.
"Crick-Crooooooo."
Finally had my day off.
We had breakfast for dinner. Imagine the lightest, fluffiest pancakes you've ever had. Just the right amount of buttery crisp, melt in your mouth, almost like cotton candy. Maple sausages. And fried potatoes.
Finally got my Mother's Day brunch.
All's well that ends well. 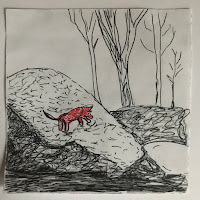